As an empathy/movement facilitator, she creates deep transformational spaces that brings her extensive training in Nonviolent communication and relational neuroscience together with creative movement in support of healing, self-connection, and new possibilities.

Sasha teaches at Gibney Dance and The International Partner Dance Intensive, and recently guest taught at NYU Langone's Initiative for Women with Disabilities.  She taught modern and student performance workshops at Dance New Amsterdam from 1999-2013.  As Artistic Director of Sasha Soreff Dance Theater, Sasha has created and shared multigenerational, participatory work on stage and in community settings for more than fifteen years. SSDT's work has been seen in performance by students at the Ailey School, on tour in the North Country of New York State, at the Queens Museum of Arts and The JCC in Manhattan.  Other venues include University Settlement, where the company was in residence for the 2013-2014 season, HERE, Dixon Place, the Flea, Long Island University, the Harlem Childrens Society, and WNET television. Sasha worked with Roots&Branches Theater to create intergenerational work that has been presented throughout senior and community centers in New York City.  She has served as a teaching assistant to kinesthetic anatomist, Irene Dowd, and has completed the Level 1 Teacher Training in Breath~Body~Mind, a series of breathing and qi gong practices that promote well-being. She was a founding company member of Isabel Gotzkowsky and Friends from 1998-2004. A Maine native, she graduated from high school at North Carolina School of the Arts and received a BA from Barnard College. 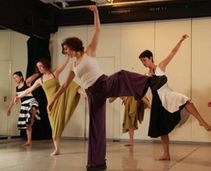 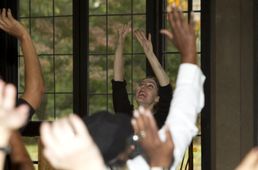 photos of Sasha teaching by Paul Taverna and Judy Aiges, top left photo, from The Dancer Who Wore Sneakers and Other Tales, by Gannon McHale